Greetings, Gentle Reader, and a Happy day unto you.

Yes, as a matter of fact I am as shocked as you are.  But never fear, I'm working at the shop this weekend so no doubt the joy of being in the black will overtake me.

Here are my earning finishes--- with big thank yous to my friend who needed dog/house sitting.  Her excellent light and comfy recliner helped immensely with my productivity.

LKs (nope, not the colors they were charted for).  They have their charms too.  Can I figure where I put that photo? Nope.  I guess it is high time I sorted out the flash drives. A little bell ornie I've been wanting to do for years.  I just love him.  O believe another one of these will happen soon. 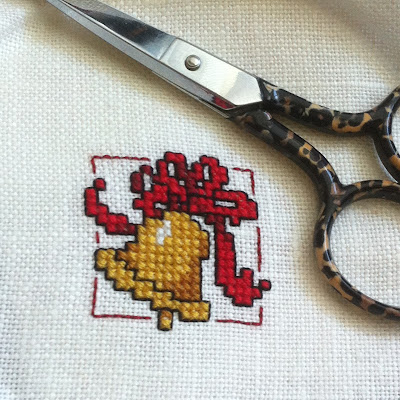 Another LK that happened post-house sitting.  Possibly under the influence of the house-sitting high. 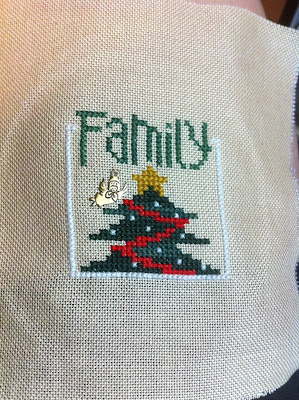 There's another finish -- a little candy cane from the same series as the bell.  Apparently *someone* did not take a picture of that.  Sigh.   And there should be two more LKs, but *someone* can't find them to attach their charms.  *Someone* has a lot to answer for!

And then some little bits of progress --  Prairie Moon's Home of the Brave which hadn't seem the light of day in a while.  I do really like working on this piece.  It is a nice balance of blocks of color and yet enough color changes to make it interesting.   It just got sidelined because of commitments to other things, but I really want to see it under my needle more regularly. 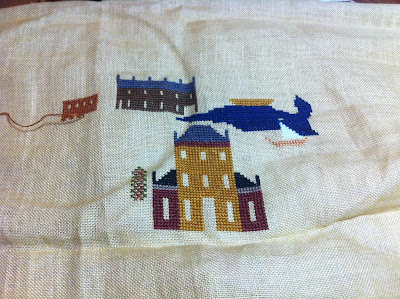 One of those commitments... the baseball flag came back out to play a couple nights ago.  This one.... I tell you.  I stitch and stitch and stitch and get maybe an inch done.  Sometimes I think that even if you left me in good light, in a cozy spot, with perfect audio books, no TV, and only this piece for a long weekend, I'd still only get maybe a row of those dang balls done. 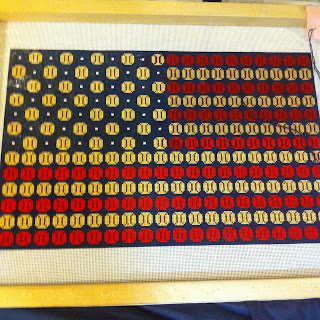 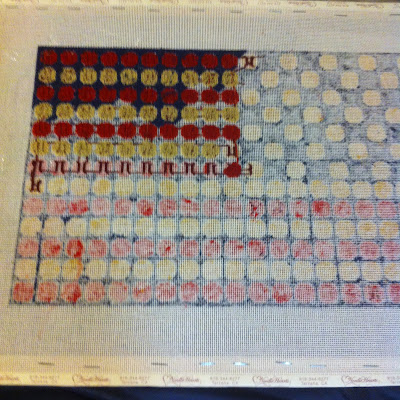 Another powwow offering for your enjoyment because:
1.  I promised you
2.  I can't figure out where I filed the other pics I was supposed to be adding here.
I just loved the rainbow dying on the middle guy's head piece. 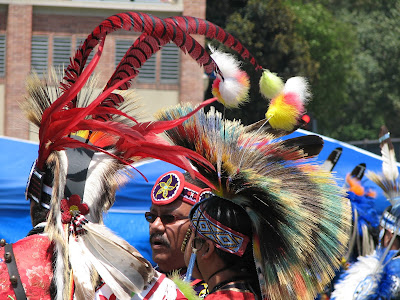 Though I am most partial to the shawl dancers. 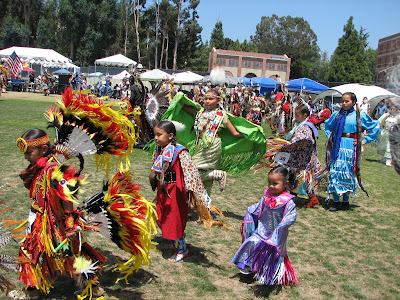 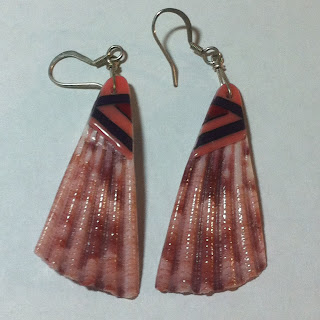 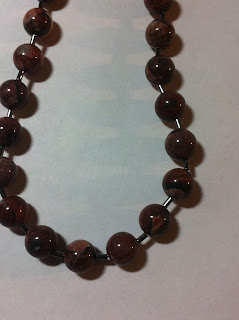 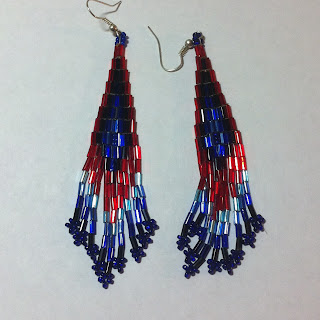 Now, sally forth and have a wonderful rest of your day.

Pratchett Thought of the Day: 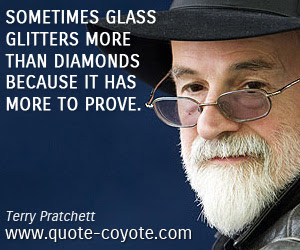 .... two things that often go together for me.

Hello, dear friends, last weekend I decamped Chez Hovel (or The Untidy Sett as I am inclined to think of my digs) for a friend's house to dog/house sit.  You see, I was the one who set her up to adopt said dog therefore she declared it really was rather my responsibility to watch it while she gallivanted off to NYC.  Since she has wifi which allowed me to keep my coworkers from imploding and I was once again maxed out on vacation time, I saw no reason not to head off for what I thought of as a resort retreat without pool boys.  I mean a choice of recliners, a devoted dog, really good natural lighting --- what's not to love, right?

So on Thursday morning I arrived at my temporary home and unpacked part one of my insanity: 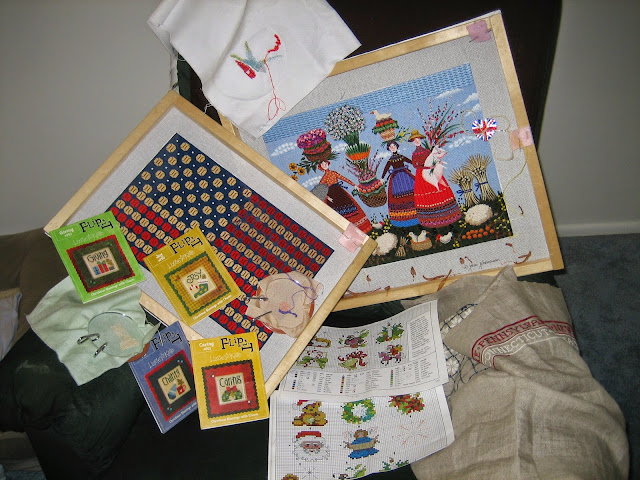 Now, I was there from Thursday morning through Monday night.  So of course I apparently thought I could finish every major project I had going.    The white corner showing at the top is my Boothy (that didn't come out of the bag the whole time I was there), the green fabric in the hoop on the left is a Celtic cross ornament that I also didn't get out of its bag, the baseball flag I could stitch for hours and hours on and still only finish an inch (that didn't come out either), and the states flag in the right corner also did not make an appearance.   I did manage to do 2 of the 5 LK Flip Its (they haven't made it to the "dope" list because I didn't bring a thread matching the fabric to attach the charms with), one of the little ornies (from the sheets between the flags in the picture), and a batch of Ethel's sky.

Pathetic!   II mean I did stitch a lot... I'm just that slow.   Ok, I did cook a lot too.   And I swear on my stash I did not nap the weekend away.  I never got a nap in actually, because my four-footed charge seemed to think napping indicated a lack of "better" things to do like walking or petting.

My roomie was at first very suspicious of this stitching stuff -- 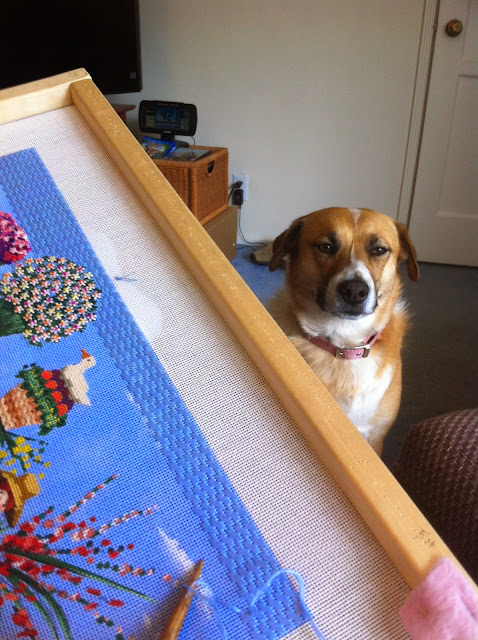 Then she went with the crisis of confidence look -- the apparently-I'm-not-cute-enough-to-put-down-that-thread-crap pose. 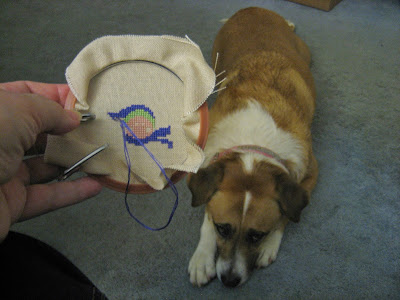 But she did seem to like the audio book effect.  She really had to since the TV only came on for the hockey game.  Which leads me to part two of my insanity.  Not only did I bring enough stitching to make it through 6 months, I also came with reading-- 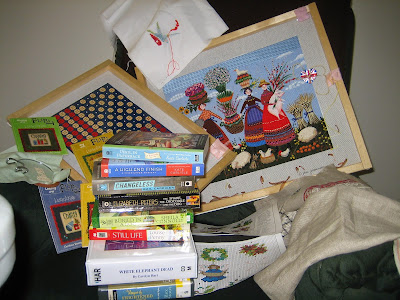 That's 6 paperbacks and two books on CD.  That is IN ADDITION to the 20-ish audio books I had checked out from the library and loaded on my computer (and we'll not mention the 100+ Audible titles also on said computer).  I believe I finished 5 books -- 4 library check outs and an Audible title.  I did open the top book on the above pile (a Kate Carlisle), but really I could have skipped that bag.

Oh and it gets funnier.  My buddy is also a reading fiend, so it's not like I could have lacked for books at her house.  As a matter of fact she told me to check out the box she was putting together to donate and I pulled the items below out because she'd been singing their praises for a while and I thought I'd try them (mind you, I gave her the Charlaine series, but apparently I didn't buy it all for myself.  or at least I didn't get it all input into my online catalog). 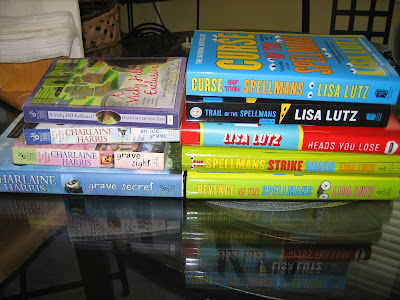 Currently they are on my floor waiting for me to figure out a path to the shelves so they can join their friends.  [You think I'm kidding?  Silly you.]

Regardless of my insanity, or possibly because of it, I had a lovely time.  I stitched, I read, I got a lot of these walk-me/pet-me/what's-that-you're-doing-now looks: 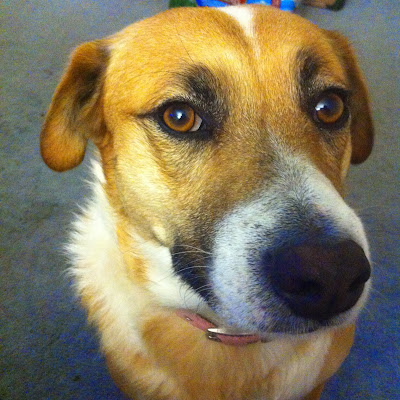 I picked strawberries in the backyard while my furry friend had breakfast al fresco. 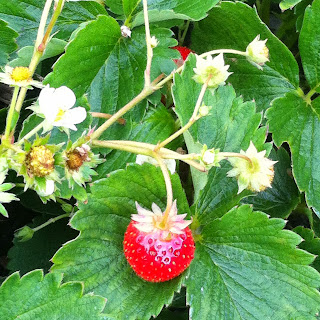 I sniffed heavily from the gardenia bush. 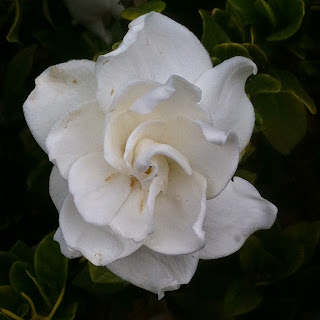 In short, I had a grand ole time.  I can only wish you as pleasant a weekend as I had last weekend.  And, for my American friends, a peaceful Memorial Day possibly filled by red,white, and blue stitching.  I'll be at the local national cemetery.  Where will you be?

Pratchett thought of the day: 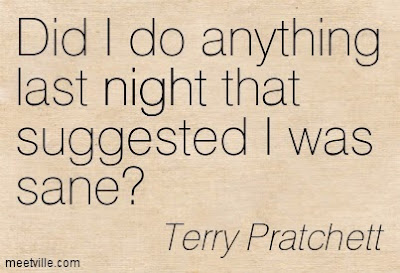 And We Have a WinnerI 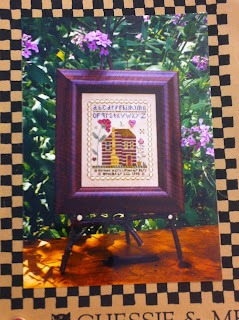 Congrats, Gillie.  I'll contact you about arranging delivery.  I hope she brings you a few hours of stitching fun.

Speaking of stitching fun, look who got several stars done on Ellen's flag (By Gone Stitching's One Nation)! 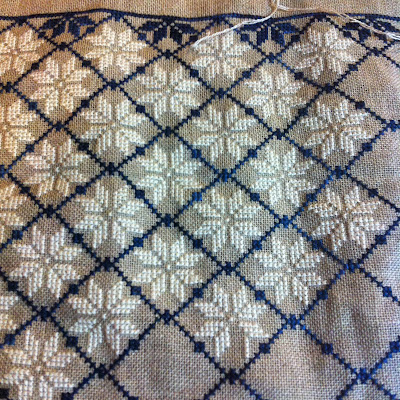 And I celebrated finishing Big Tree by starting another ornie -- one of the Lizzie Kate's that I've been saying I am going to do for years.  Sharp eyes will notice I'm changing the colors.  Why do I make my life so difficult? 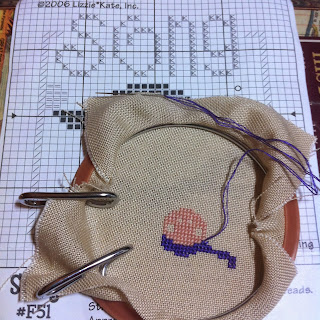 I spent my Saturday being swamped with customers at the shop, but after they all left I managed to get another basket done on Ethel-- I;m really quite fond of this one. 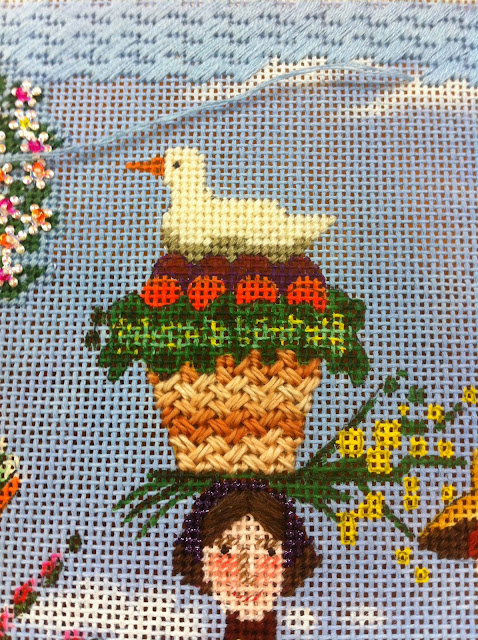 The complete joy of the weekend however was getting to spend all day Sunday at the UCLA Powwow.  I used to go every year but for the last few years I've been in DC celebrating my sister's birthday at this time.  This year The Sister took herself to Europe for a marathon river cruise (cruise the river and do a segmented marathon at the various port stops) so I could indulge myself in my traditional spring event,

I particularly love the little ones -- 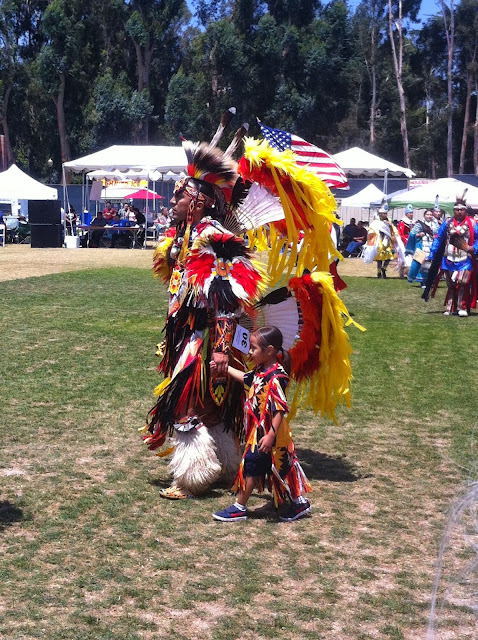 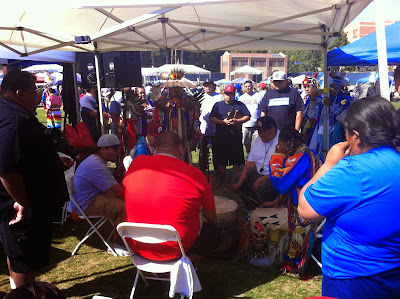 Some of you may recollect that I do a lot of shopping at powwow-- especially for beads.  Usually a few pounds (I think of them in poundage because they get pretty darn heavy as the day wears on and on and on.).  But this year the bead vendor didn't come.  Never fear!   I consoled myself with jewelry shopping...  lots of jewelry shopping.  Pics to come!

Hopefully I'll be productive tonight and have more to share this week-- both shopping and stitching.  I'm looking for May to be PRODUCTIVE.... who am I kidding, I look for that in every month, and in every month I don't seem to make my line in the sand.  lol

Pratchett thought of the day: