So, are we perky all the way around the globe?   Ok, ok.  I know.  A little too much perk there.  I'm trying to hold on to the glow of the weekend--- and look forward to the utter bliss of the holiday weekend coming next weeknd here in the U.S.   All glory to extra stash abatement time!

A few exchanges have alighted with new owners so I have several share-worthy thigs for you today.

First, allow me to introduce the TOTALLY AWESOME Chirstmas-in-July exchange ornie I received from Sarah as part of the Friendly Stitchers yahoo group exchange -- 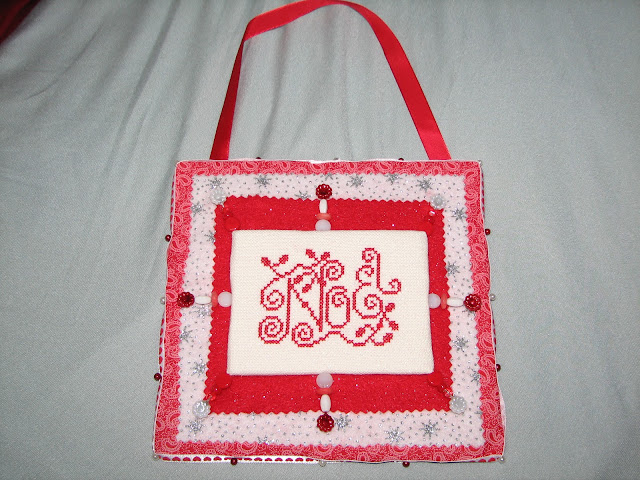 Check out that amazingly wonderful finishing -- 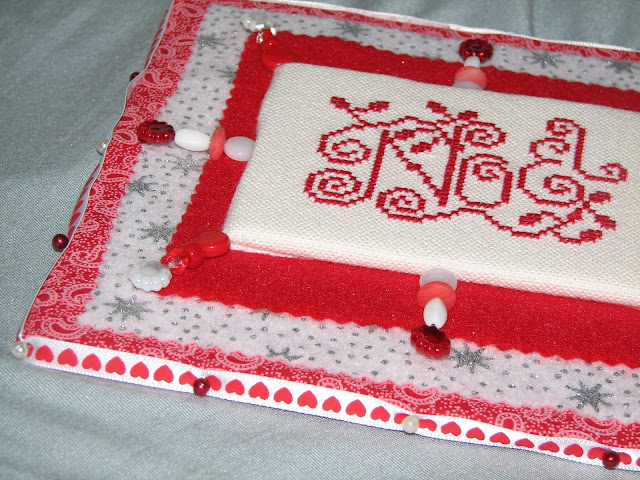 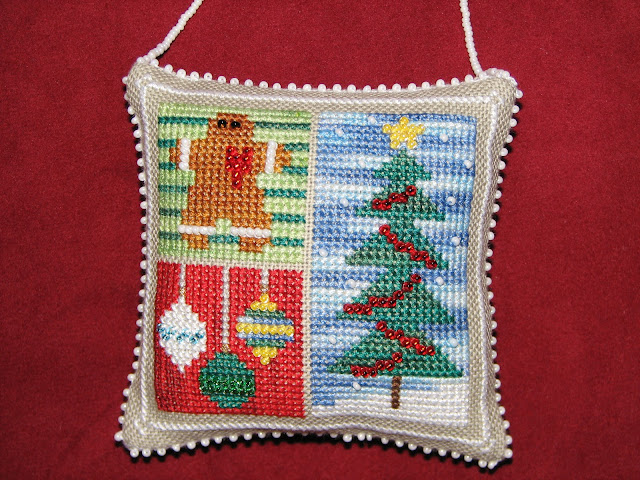 You know me.  I just have to bead ornaments.   For the back I took a cardinal from another LK Chrismtas piece, boxed it up to match the theme of the front and then made up an alphabet that looked like it was LK-ish -- 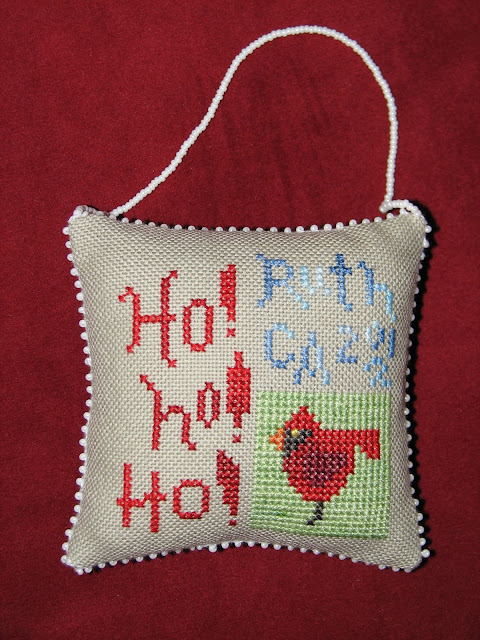 Does it boggle anyone else's mind how much stuffing one of these little ornies can hold?  Every time I'm baffled by the amount I need. 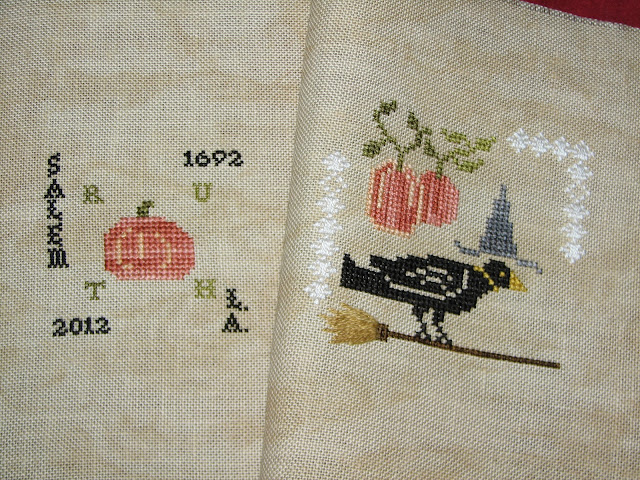 So, the bird and the vertical white column are from the afroementioned BBD Chrismtas ornie, the pumpkins on the front are from (I think) the BBD Anniversairs October piece, and the pumpkin on the back is from (once again, I think) the BBD Autumn, 3-part birds of a feather piece.  The rest I made up because they seemed to work.    Apparently neither Kathy nor I are very big Halloween people, so I turned this into an ode to the "witches" of Salem, hence the Salem and 1692 on the signature square.   [I thought of putting red boots on the crow, but only a Nanny Ogg fan would appreciate that.]

I owe you more pictures, but they'll have to await anotherday.  I need some culling time.  I don't know about you, but initially I love *all* the pics.  Weeding takes a little time and distance.

Up to some good

How could I help but be?--- it's Olympics season after all !   There's cheering on to be done and frantic praying for success and lack of injuries to accomplish.   I know all this TV time is supposed to give me more stitching accomplishments, but frankly sometimes it is just too stressful to stitch.

I did manage to finish my July ornaments challenge with the Friendly yahoo group -- I signed up to stitch and completely finish2 ornies in the month.  I got 3 done although 2 are very small and thus far lack hangers.  Hey-- if my ribbon stash would quit hiding from me they would be done-done!  That happens to you, right?   It's not just me who has finishing bits that hide behind chairs, in boxes, and under stuff just to keep me from finalizing a piece?  Heck, I wouldn't put it passed some of the stuff to have nipped off into the kitchen cabinet to hide behind that can of cream of celery soup I got for a long forgotten casserole. 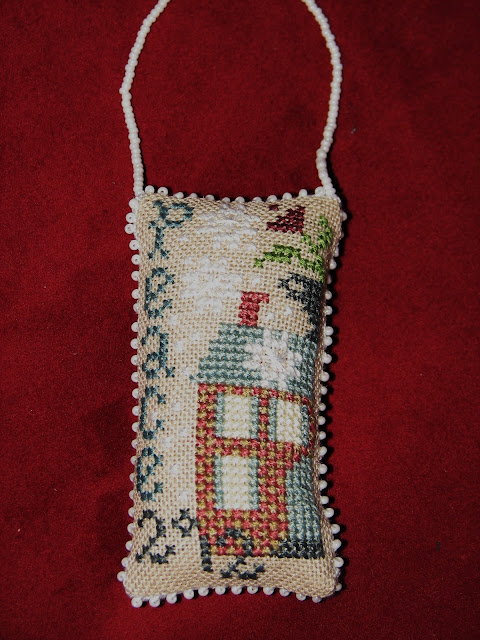 That is Blackbird's Peace ornament from the 2009 JCS, and no, of course the coloras aren't what was called for.  They are close at least. 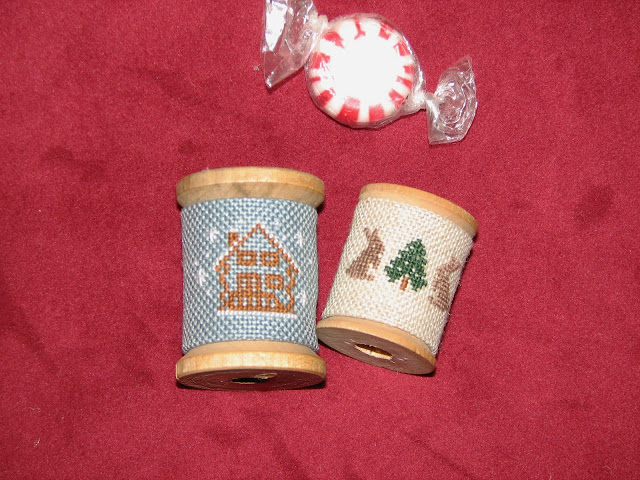 And here are my ribbon-less over-ones.   the chalet and the bunnies -- no, I don't think the bunnies are mutants, I think that mama bunny just would not let a full-sized pine tree in the hole so they picked a little table-top one. 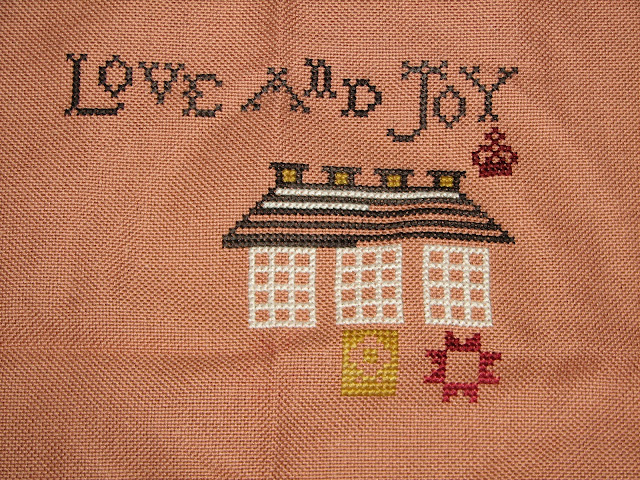 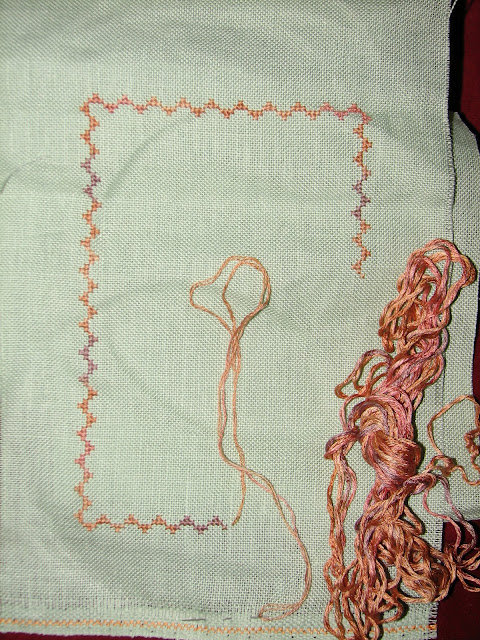 And to prove I can do something besides ornaments -- 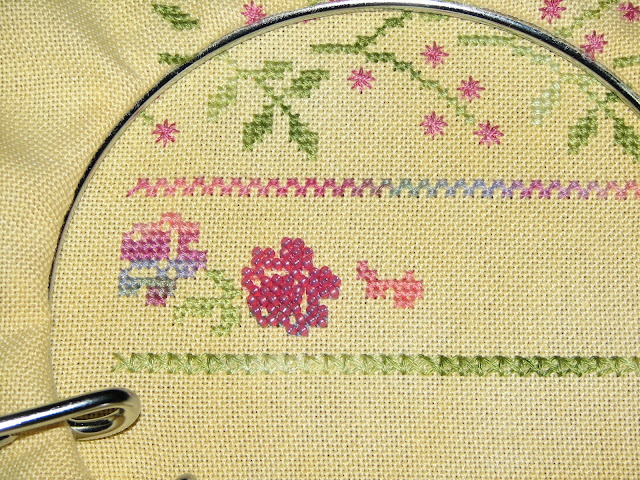 See, I think I'm so busy cheering that I can't focus on stitching...... combined with my general stitching slowness, of course.

Happy Olympics to all and to all good stitching!
Posted by Ruth at 11:46 AM 8 comments: