Been bad. Been busy. Been grumpy. Been accomplishful... no, not so much.

Hello world.  I was going to be so much better in 2012.  I was going to:
1.  post at least once a week (and mostly twice)
2.  adventurously (and against my better judgement) sally forth into the Crazy January Challenge
3.  not care so much about stupidity in global corporations (well, one particular global corp)
4.  read  a lot
5.  stitch a lot
6.  finish a bunch of WIPs
7.  become a better person
8.  cure the common cold
9.  stop buying so much stash 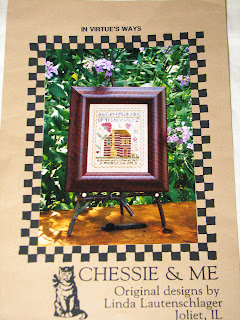 and after spending a traditional evening switching colors I have made it this far: 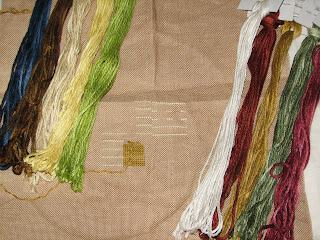 
I've been maing some progress on my Ladies Day -- 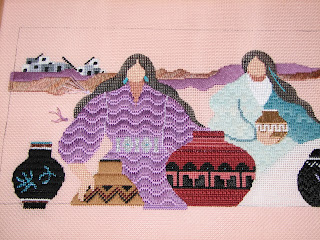 That purple dress is alternating rows of Belle Soie "Princess" and DMC and I love it almost as much as I love that pot next to her.

Just this week I made startling progress on my VBeatrix Potter.  She's all the way to here now -- 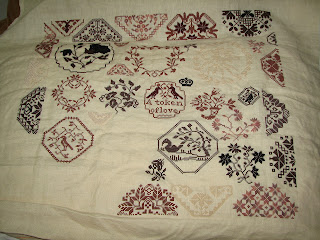 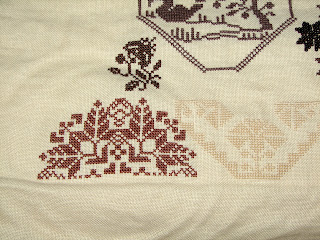 Yup, that one.  Since before Christmas I have finished the left-hand side of that.  No.  Honest.  Ok, you can stop laughing now.  Yeah, yeah, with progress like that I'll never set the stitching world on fire.  I know.  I know.  Two-three more years and I'll be done!

But hey, I've been sooooo busy on other things (not)... 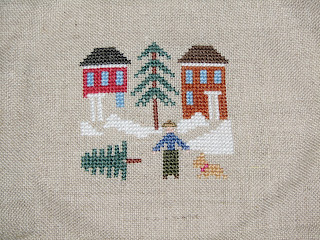 This LHN ornie was goint great guns until about an hour into my flight to Washington, DC on December 17th and hasn't seen the light of day since.

This Prairie Schooler ornie got started before Christmas and also hasn't see the light of day since: 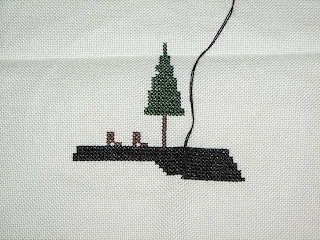 But, since I'm never one to be disuaded by undone projects, I simply had to start some more new things like this needlepoint ornie: 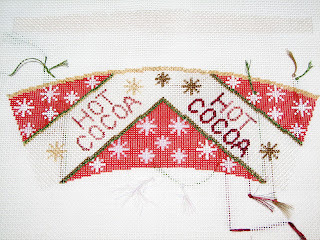 And this stocking which is for the lettest nephew -- it will primarily be done by his grandmother (my sister).  I'm just getting it started and then I'll hop i nto finish the background: 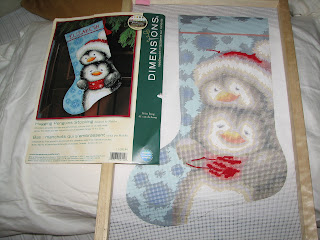 My sister and I have this lovely arrangement.  You know how I feel about "fiddly bits" (you know those patterns that require constant color changes and such?   Well she like that.  She says it keeps her from being bored.  Well, she's putting in the penguins and I'll do the background -- works out just fine for me.

So let's see, if I start the Crazy January Challenge late I can already claim new starts of:
1.  penguin stocking
2.  cocoa needlepoint
3.  Virtue's Ways
and I could swear there were a couple more.  Then again, I could just be thinking of all the stash I've been hauling in.  That will ahve to wait for another day.... sorry.

Happy stitching to all, and may your 2012 resolutions be going better than mine are!
Posted by Ruth at 2:10 PM 15 comments: