Hey there.  Contrary to reports I have not fallen off the face of the planet, I have merely fallen down a deep, dark hole at work -- it is lined with papers and due dates and lists of things to do and things that don't work and people that think they should (work, that is).  As holes go it could be worse.  Most of the time it still makes me laugh although today I bordered off into seething for a while.  But that is all just boring details.

Want to see what has really been driving me nuts? 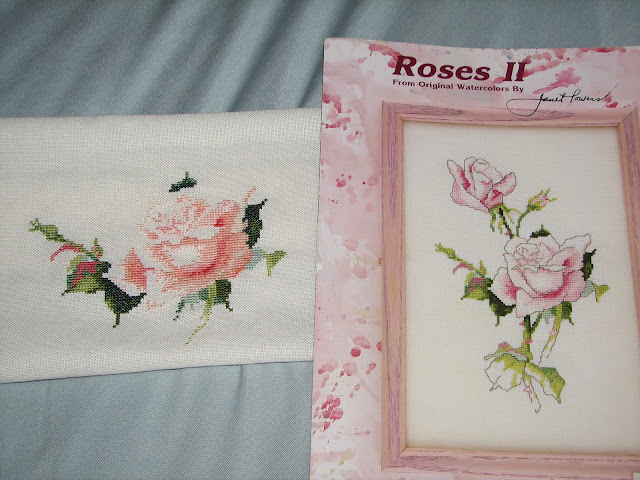 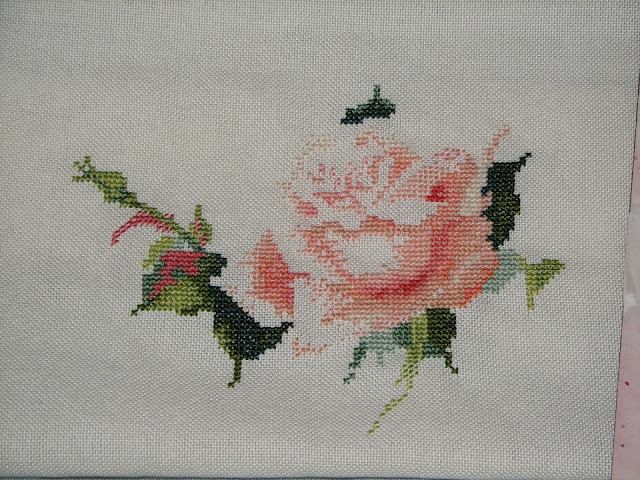 Yep, my good ole attempt to switch Green Apple's Roses II to a peach tone rather than the pink it is designed in.    Actually over the last couple nights/days I have powered through quite a lot more--pretty much all I have left is a small part of the bottom leaf and all the BSing.  Dearest gentle reader, I do so hate fiddly stitching!   {This does not bode well for that plantation piece from the last post.}  I need to keep focused though because I wanted this done this month and as you well know it's not like we have much May left. 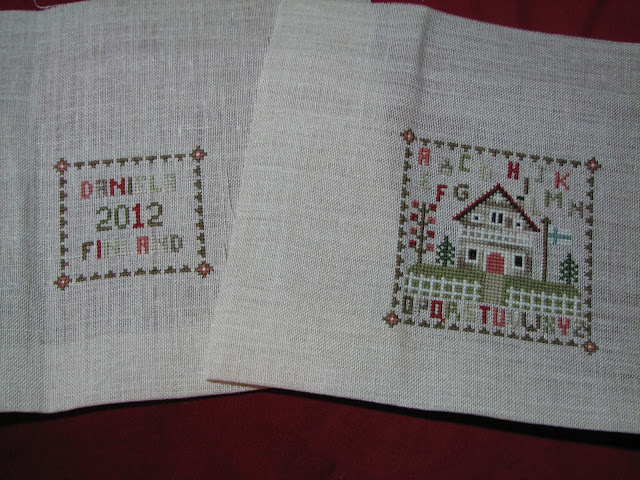 I mean check out this adorable house -- 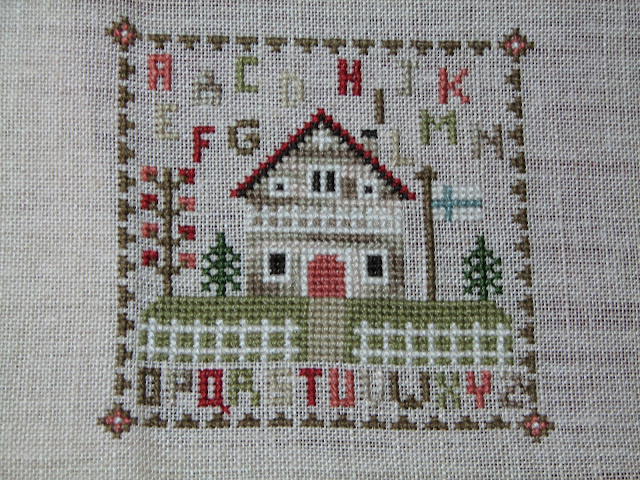 Daniela did this Maryse house but customized it for me with the Finnish flag.  I like to think of the flag as Daniela waving at me ... and the house as my little cottage along the fjords.   Don't you think we all ought to meet for a stitch in there?

If you haven't gone to visit Daniela you definitely should -- especially take note of her absolutely priceless post for today .  Trust me, you'll want to see this.

One last bit of stitching news-- for Memorial Day I eschewed the rose and worked on BBD's America which I made decent enough progress on until stymied by a lack of one floss color (you'd think I could learned that since I insist on switching colors that I should also learn to switch to colors I have plenty of, but nooooo)  and rose-abandonment issues -- 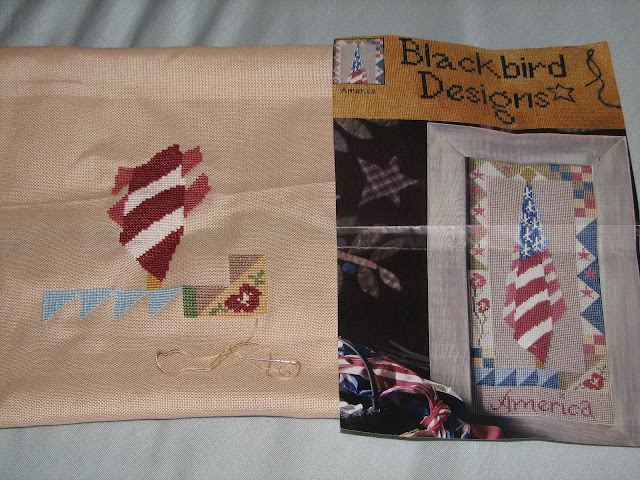 My aim is to turn this into a memorial piece for my great uncle Ellis who was killed in action in WWI.

And, since Ellis gives me the lead in - from my Memorial Day sojourn to the Veterans Cemetery -- 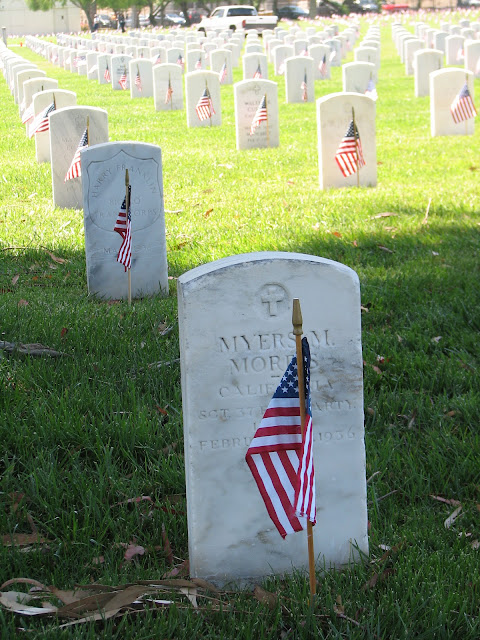 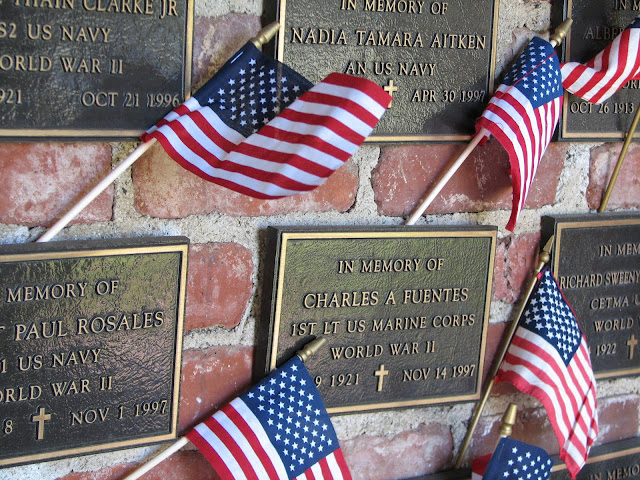 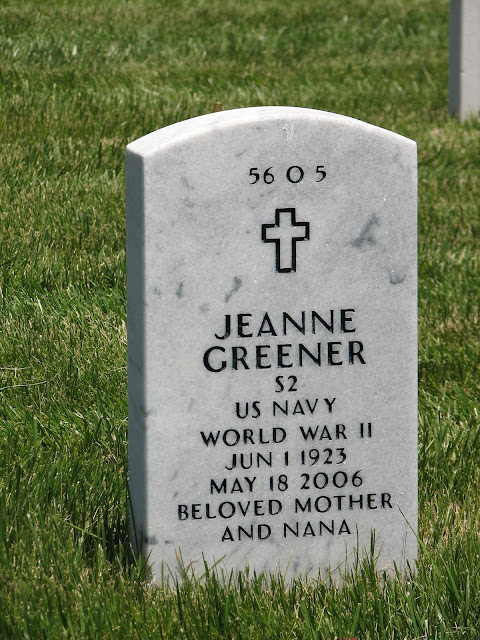 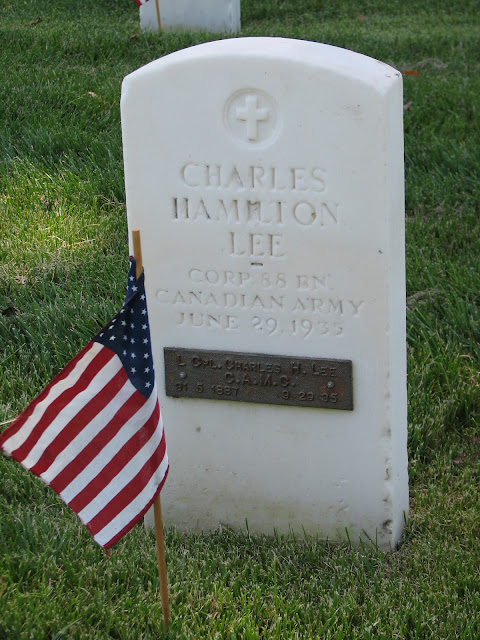 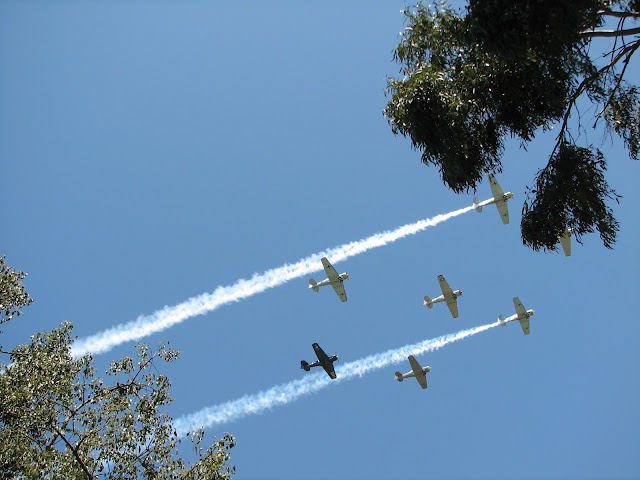 Protesters: Enemy of the State or Handy Stitching/Hockey Accomplice?

I was laughingly annoyed when the Occupy forces declared that they were marching on downtown.  Then they announced their intentions to shut the city down, and by that not just the City offices, but the city as a whole.  Look, "people,"  (and I use the term loosely) stop screwing with the folks for whom you allegedly speak.   But I suppose I don't need to throw rocks at you all because since your protest caused my Fortune 500 corporation to close for the day, I was able to work at home and watch the NHL playoffs.  And when I finished work, I was able to immediately move straight into stitching rather than having to wait for the commute home to be over.   I refuse to thank you though .... annoying twits.

What have I been up to besides festering about idiotic protesters?   Well, no good, of course.  I finished the Prairie Schooler Santa I'd been working on. 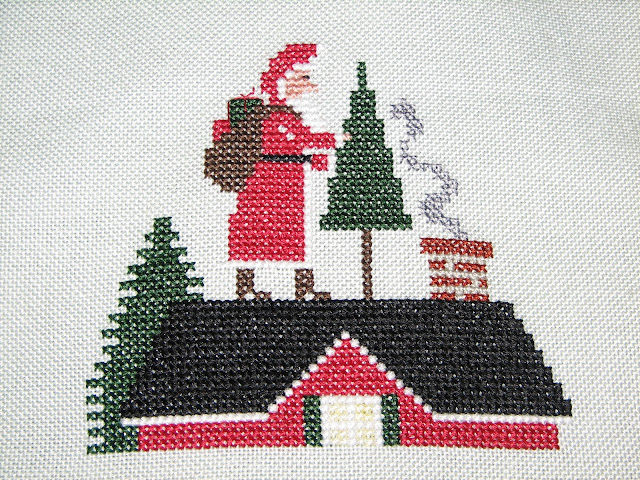 He was awfully fun.   I might need to get some more PSes in my WIP pile.

I have also finished the fishy ornie, but I  was not in a photo mood yesterday.  And I'm also lame -- I got my moose ornie back from the finisher on Saturday, but somehow it escaped the camera.

Actually Saturday was an "interesting" day all around.  I was working at my shop and got word we were going to get to hang a Mindy trunk show.   I've taken down shows before, but not hung them so I was energized for the new experience (yes, I know, there can't be that big a difference between putting things on hangers and taking them off hangers, but what the heck, I lead a relatively boring existence).  Also, I like Mindy canvases.  They are always very precisely painted and while they generally don't lend themselves to stitches, they do offer the opportunity to go nuts in threading.  It was just as bad for my mental well-being as I had expected..... you see I declared a fiscal austerity campaign after my weekend debauch at powwow, and now I was surrounded by so many beautiful canvases!  Want to feel for me?--  I mean what's a girl supposed to do in the face of these: 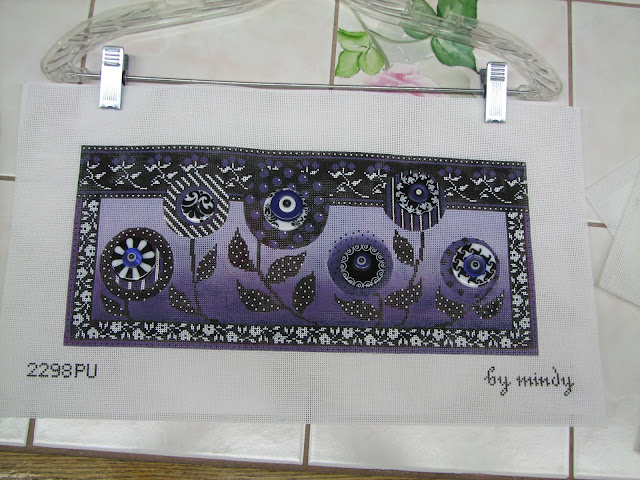 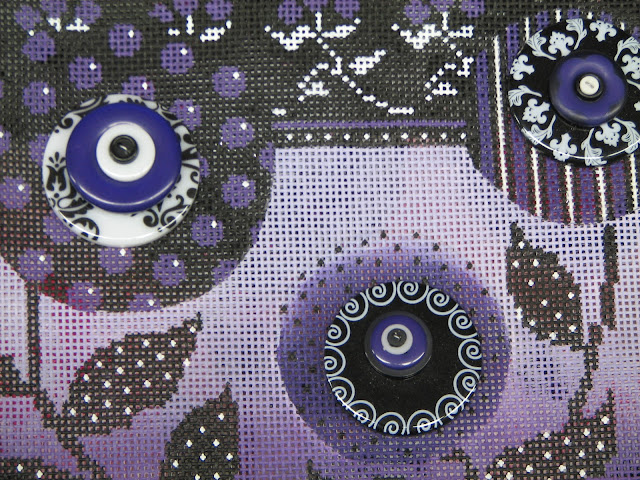 And that one comes in a range of colors! 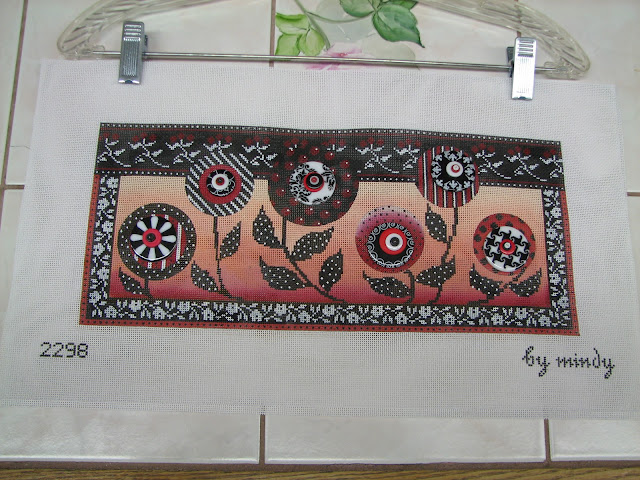 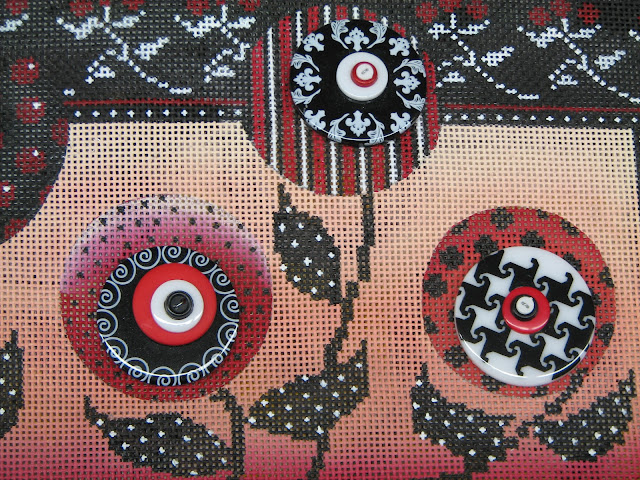 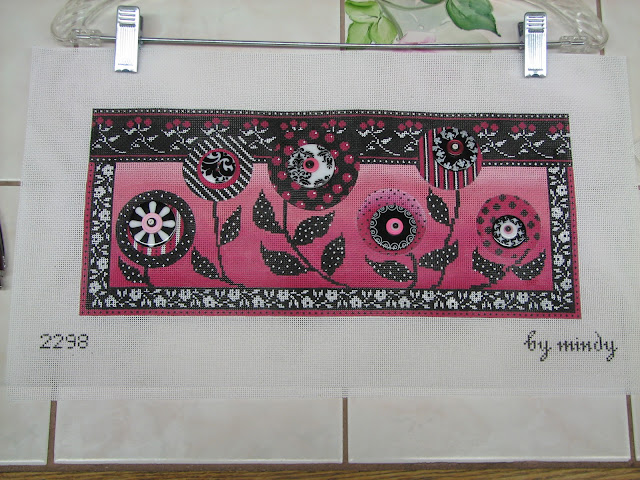 I just love how she's using the buttons!  There's also a yellow one of these floral rows.  At first I was certain I *needed* the purple one, but now I'm thinking the red one might be better.   But the purple one..... oh  waily waily!

Can't you just imagine these filled with Krieniks, Slik Lames, Neon Rays, Fyre Werks, and maybe even some velvets??????--- 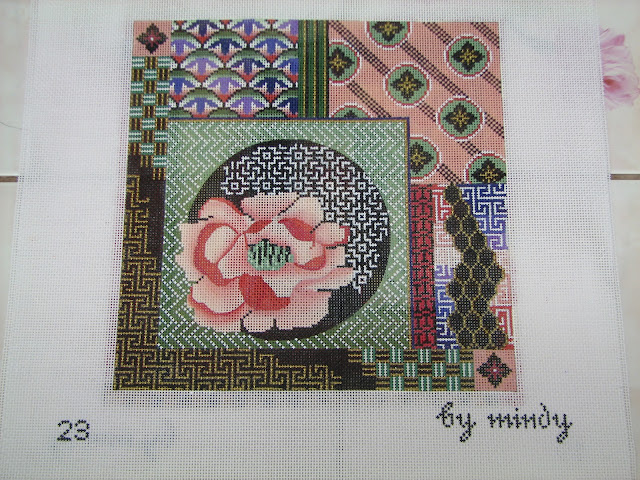 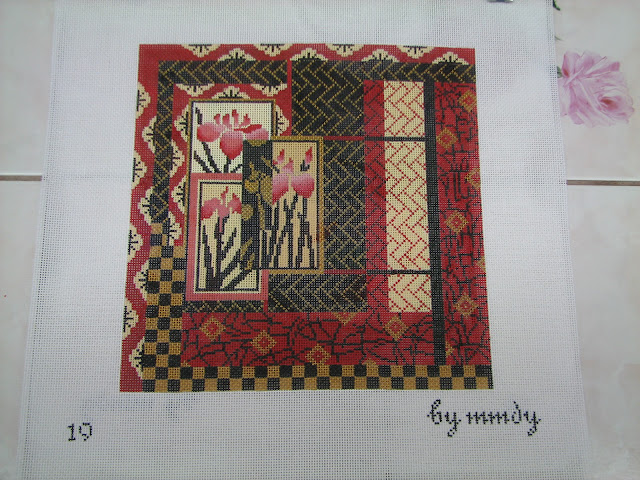 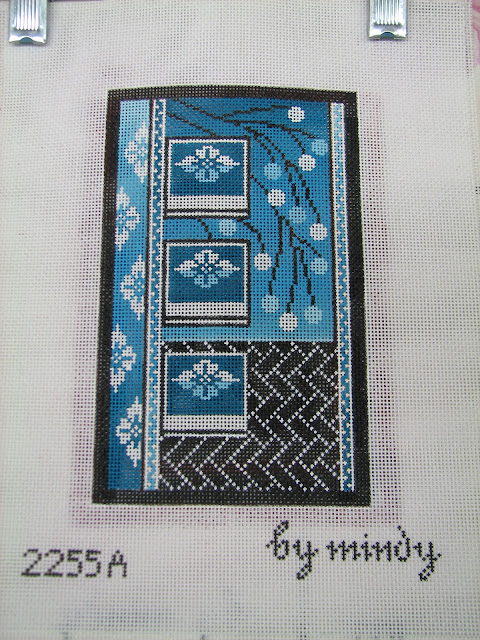 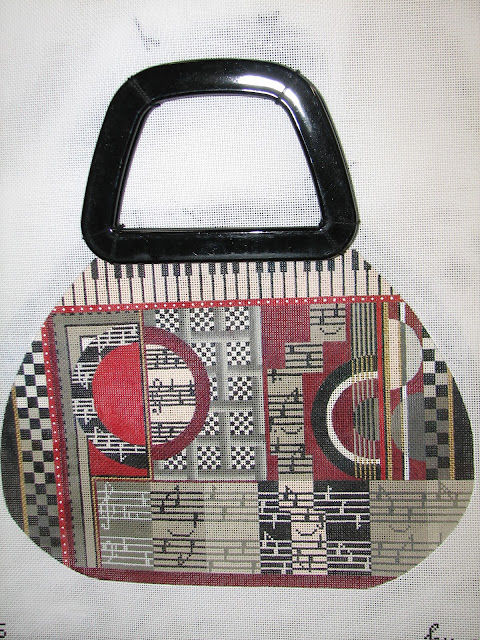 I'm trying to convince my buddy Jenn that she needs to do this for her mom.  She's not biting so far.  Something about how mom has enough purses.  Sigh.  I try to spread the stash addiction as far as possible..... maybe then I can get a contact high and not need to buy every canvas that waltzes through the shop. 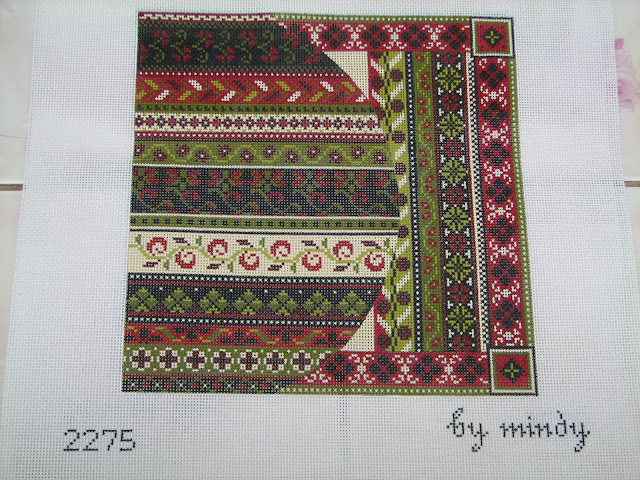 That last one always makes me think of tapestry ribbons.  It reminds me of going to science fiction cons with my mom and lingering with her at the notions and trims booth, ogling and fondling ribbons not dissimilar to these.  Actually, I think this canvas was in the shop last year and got snapped up.  I fear I might not be able to let it leave with someone else again.

The arrival of the Mindy box was not my only shop problem though.  The night before I had started ByGone Stitches' One Nation flag for my shop owner.  You see I'd had her order the fabric for the 3 flags I/we are doing (one for her, one for me, and one for and by my stitching buddy, Jenn), and I thought since the fabric had come in a couple weeks before I really ought to knuckle down and show her some progress.  We don't carry Crescent Colors so she switched them out for Presidential Blue (Sampler Threads), a Threadwerx red, and a not-really-white from Splendor  (For the record, Jenn's working with the same colors as our shop owner, but I must be different so I'm doing it in Bell Soie Sister Scarlett, a sort of demin-y blue Waterlilies, and the same Splendor as my co-conspirators).   Being slow, I didn't make much progress in one evening, but by Saturday morning I had this to show her: 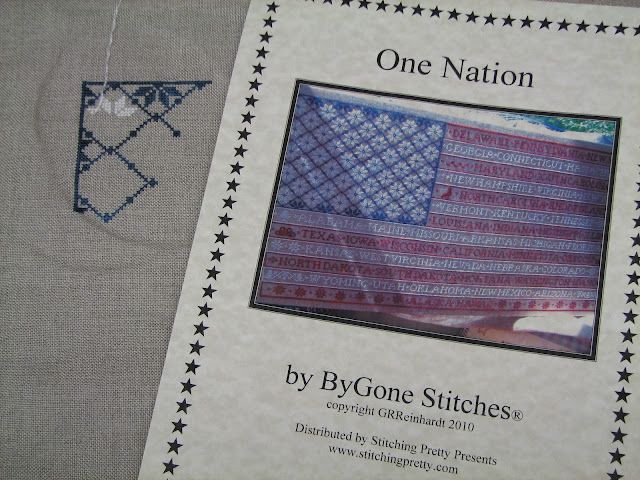 She was pleased (what's not to like about not having to stitch a giant flag for yourself?), but she'd also arrived with "presents" for me.  You see she recently was at a wedding in New Orleans and fell in love with some xs charts there.  So here she comes with them for her only shop xser.....   Here's one of the 3  surrounded by its threads-- 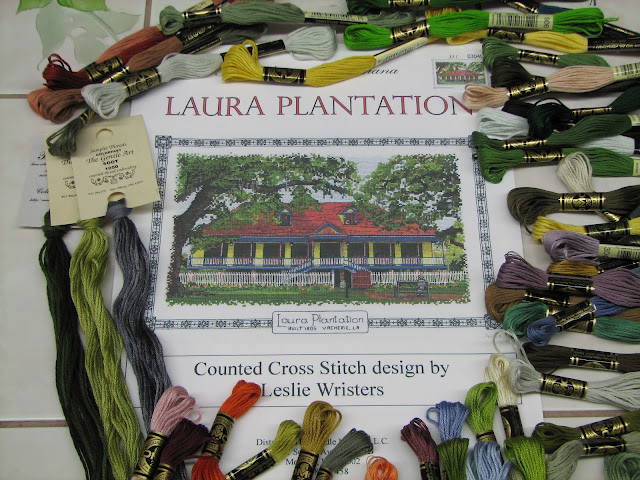 Gentle reader, is that a guffaw I hear?   Yes, you are certainly entitled.... what part of this confetti-stitching fiasco says Badgerish to you?  lol   Good thing I love my shop owner!

So I guess the moral of the story is what I get for finishing little ornies is GIANT WIPs.  Something seems wrong with that.